Under the rough exterior of this heavyweight lies a very small heart. The Mastiff is an extremely gentle and child-friendly gentleman.

He is a first-class vivant. He likes a well-aligned life. Makes an inventory of his property at the crack of dawn and trusts that all the activities of that day, run according to a normal pattern and is deeply unhappy if deviated from the normal standard.

Despite its particular suitability as a watchdog (not to be confused with defense dog) it is a very, very quiet race. Most of the day, you'll find him lying somewhere. That is normal really, because so much is there not to guard because just guard to guard is unnecessary and below his standard. He only guards when needed and that is the way it should be!

So there is our friend. His heavy head between the front paws. Nothing moves except his constant reciprocating eyebrows. But don’t be fooled! He does keep an eye on everything.

This carefree lifestyle gives the impression that the Mastiff needs little to no movement, but it is just the opposite. The huge muscle that he has needs to be built up to be able to fully function and that can only be done by sufficient exercise. If this is a day to day activity he will exercise with great pleasure.
It is not so much the size of the garden what counts (he does not use it anyway), but the time you spend together.

The Mastiff is a social dog. One can have him in a pack without any difficulties or big problems. He will do well with other breeds (with the condition that all the other dogs are well socialized).

Furthermore, the Mastiff is incredibly devoted to his family and loves them like no other. He will defend his family at all times and asks nothing in return. He just wants to be treated as a full member of the family and certainly does not like to be put in a cage. He thrives on human companionship

If you put it a Mastiff in a cage, he will be very shy and only defend its cage, but certainly not his family.
To fulfill the duty of watchdog it is necessary that the Mastiff is a large dog who demands respect alone by his appearance. It will scare off any intruders by just being there.

However, height and weight are not included in the standard because this would only be striving for a certain height without looking at the total dog.

The higher the better, provided that it is accompanied by sufficient mass, resulting from a huge ribcage. The height will have to come through the depth of the chest instead of leg length.

Height and weight are fine as long as the dog is balanced, has good movement and heavy bones to support his size.

The most important thing is that the Mastiff should have in any case, is a longer body than height! A length which occurs predominantly from the chest.False ribs deep and well set back to the rear. He also has broad loins and very deep flanks.
The head should be very broad and generate a square appearance. Under normal circumstances a flat skull but wrinkled when attention is drawn. The stop is marked and over the entire length, full and fairly short snout, which, however, should never be shorter than 1/3 of the total length of its head.

The Mastiff has short hair, but the hair is slightly longer on its neck, back and shoulders.

There is a choice of colors: the fawn blonde, brindle and apricot. When breeding the different colors may be combined. Color is a matter of taste.

What a Mastiff absolutely should have, and that’s in any color, is a very black mask and over the entire front of its head. Black ears and dark eyes. Both small.

The Mastiff is a moderate eater. 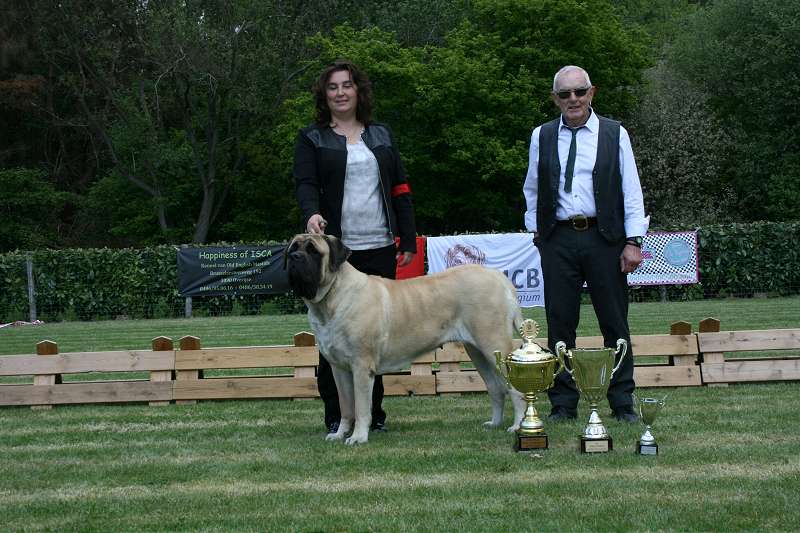